Songwriter’s Festival to Make a Stop at Russell Crossroads 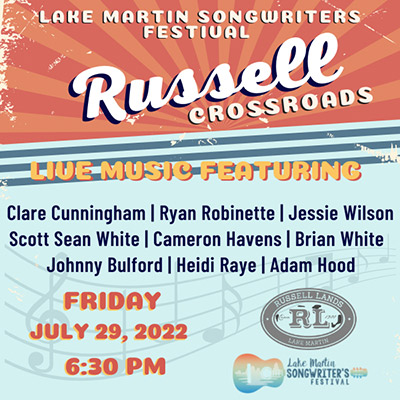 This week, more than 20 songwriters from around the world are coming to Lake Martin. These artists will perform at more than a dozen venues and maybe even write their next hit here. These talented songwriters whose names you may not recognize are Grammy winners or have multiple Grammy nominations, have written Number 1 hits, and have had their songs recorded by BIG names in the music industry. Songs like “A Woman Like You,” “There She Goes,” “The Fool,” “Ten Rounds With Jose Cuervo,” “Real Small Town,” “Watching You,” and tons of others. Here you can view a listing of all artists and the venues where they perform. The festival is already underway and comes to a crescendo with Thompson Square in concert, on Main Street, Saturday night in Alexander City.

Tomorrow, July 29, from 6:30 to 9:30, Russell Lands will host a songwriters’ round on the Town Green at Russell Crossroads. This Lake Martin Songwriter’s Festival event will take the place of our regular Friday On The Green and will feature the talents of Clare Cunningham, Ryan Robinette, Cameron Havens, Scott Sean White, Jessie Wilson, Johnny Bulford, Heidi Raye, Brian White, and Adam Hood. It’s rare that there is so much talent in one night, on one stage, and in one location. Make plans to visit as many of the venues as you can, and you’ll surely want to join us for the Songwriters Round Friday, On The Green!

Don’t Forget Friday On The Green

Fridays through the season – 6:30-8:30pm
The Town Green at Russell Crossroads
FREE

One of the hallmarks of summer at Russell Lands is Friday On The Green at Russell Crossroads. C’mon out on a Friday evening and let the music feed your soul. There’s still a lot more to come.