Russell Lands owns, manages and develops commercial and residential real estate on Lake Martin. The company is founded on the achievements of its namesake Benjamin ‘Mr. Ben’ Russell (1876 – 1941), whose love of the land and visionary investments put Alexander City, AL, on the map more than 100 years ago. Mr. Ben’s grandson, Ben Russell carries forward the vision and recently dedicated over 1,500 acres on 12 miles of shoreline to The Heritage in honor of his family legacy.

The Coore & Crenshaw golf course is adjacent to Russell Forest on a site naturally conducive to golf along the Lake Martin shoreline and is the defining element in The Heritage master plan.

The new 18-hole golf course features unique holes designed to the natural contours, elevations and elements of the lake and land, designed to be challenging to the seasoned golfer while still fun for the casual player. The clubhouse design sets the tone for classic golf and an authentic Lake Martin experience.

Each hole is memorable, accentuated by indigenous hardwoods, Alabama’s long leaf pines, bridges and creeks. The front nine takes players through stunning elevation changes set amongst pines and creeks. Picturesque Lake Martin dominates the vistas throughout the back nine. Players will remember the dramatic variety between the holes and the unforgettable destination of Russell Lands on Lake Martin.

Russell Lands selected Coore & Crenshaw, one of golf’s most respected architectural teams, due to their signature approach of honoring the land in their designs. This respect and love of the land is mirrored by Russell Lands. Bill Coore began his professional design and construction career under the guidance of Pete Dye and Associates. Golf legend Ben Crenshaw, known by many as “Gentle Ben,” is a two-time Masters champion. Bill and Ben established the architectural firm in 1985, based upon the shared appreciation for “Golden Era” golf architecture. Coore & Crenshaw have designed some of the world’s most celebrated courses including Kapalua Plantation Course, Sand Hills Golf Club, Friar’s Head, Cabot Cliffs and most recently, Bally Bandon Sheep Ranch.

“Coore’s and Crenshaw’s respect and love for the land mirrors that of Russell Lands,” said Tom Lamberth, Russell Lands President and CEO.

“During the design process, we wanted to draw out the beauty of the natural environment by providing an atmosphere that showcases the lake and the hills in the heart of Alabama,” said Ben Crenshaw. “Our approach honors the Russell legacy to the area to love and preserve the land, which became the driving factor in the golf course design.”

“The new Russell Lands golf course will be a showcase of the area’s natural beauty and a first in the region. True to our brand, our team has taken the utmost care in designing a golf course from what the land gives us. Players will have an experience that’s unique to Alabama,” added Bill Coore. 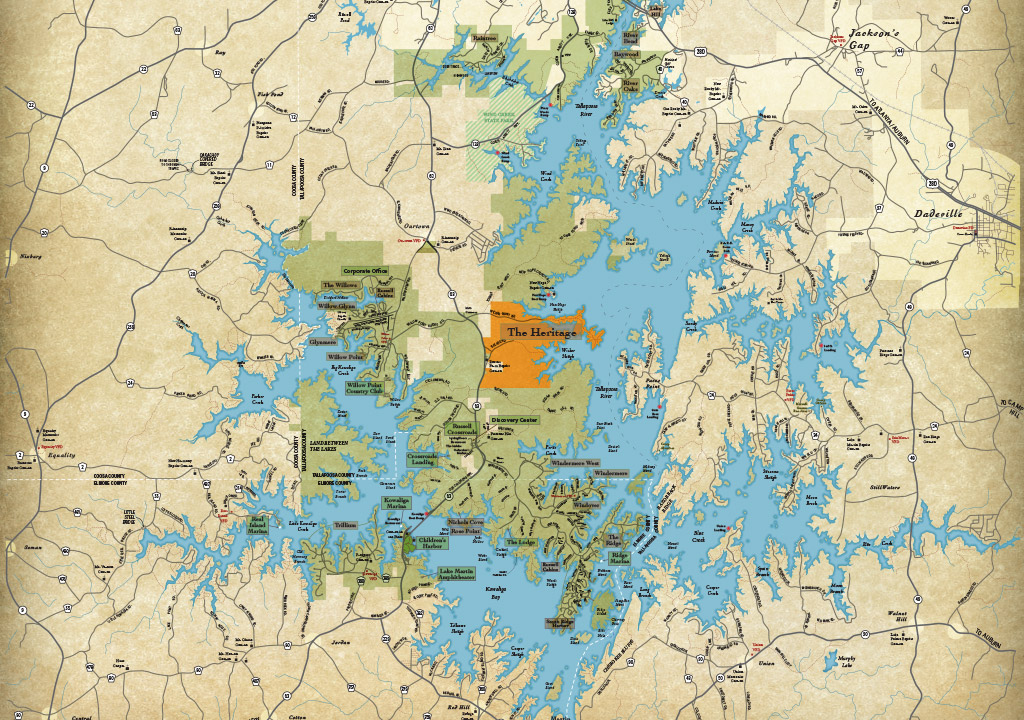 The Heritage on Lake Martin

Russell Lands’ name is no stranger to the world of recreational sports. Benjamin ‘Mr. Ben’ Russell, who founded billion-dollar Fortune 500 Russell Corporation (parent company of Russell Athletic), grew up in nearby Alexander City. When a fire destroyed most of his hometown in 1902, the successful businessman helped the city rebuild a hospital, hotel, school and other vital infrastructure to support the community. Over time, the creation of Lake Martin in 1926 and further development led to the establishment of Russell Lands in 1962, along with a tradition of promoting conservation and thoughtful use of Lake Martin’s natural resources.

“One thing people always said about Mr. Ben was that he was close to the land,” said Ben Russell, Chairman of the Board of Russell Lands. “And like Mr. Ben, Coore and Crenshaw see things that none of the rest of us can see. We’re sure happy to have them involved with this project that everyone will be proud of.”

Since its inception, Russell Lands has become a timeless destination and tradition for residents of Alabama and neighboring Georgia, many of whom visit year after year to enjoy the pristine waters of Lake Martin and reconnect with friends and family. Golf is not new to Russell Lands—the company owns and operates one of the region’s most revered private clubs, Willow Point Golf & Country Club, considered to be the most beautiful lakeside golf course in the country.

“Having this new development in our city limits will fuel growth for our city and the entire region,” said Alexander City Mayor, Woody Baird.

“We see this as a huge win for our community,” said Buffy Colvin, President of the City Council of Alexander City.

“Having a new golf course of this stature, the only Coore & Crenshaw course in the state, will highlight Lake Martin and Alabama as a golfer’s dream destination,” said Lee Sentell, Alabama director of tourism.

“As a lake lover myself, I am thrilled to see the addition of a premier golf course to anchor this neighborhood here at Lake Martin. Not only will folks be able to enjoy being at the lake with family and friends, they will soon be able to play a round of golf, too,” Alabama Governor Kay Ivey said. “Our golf fans will appreciate the top-of-the-line work, and I am glad to see this project adding to our already beloved Lake Martin. Alabama continues to be a great place to live, work and play.”

Groundbreaking for the golf course is underway. Estimated completion is early 2023. The Heritage lakefront real estate is planned for market availability in 2022.

Listen to the Experts

Hear from the designers Bill Coore & Ben Crenshaw, Ben Russell, and the project team in the video below.

Russell Lands owns, manages and develops commercial and residential real estate, primarily along 41,000 acres of pristine water and 880 miles of shoreline on Alabama’s famed Lake Martin. The multi-faceted company is one of service and commitment to community, founded on the achievements of its namesake Benjamin ‘Mr. Ben’ Russell (1876 – 1941), whose love of the land and visionary investments put Alexander City, AL, on the map more than 100 years ago.

Russell Lands portfolio spans beyond fine lakefront neighborhoods such as The Ridge and The Willows, including Willow Point Golf & Country Club and Russell Crossroads, a mixed-used development and the central town hub of Russell Lands’ 25,000 acres of land holdings. Russell Crossroads consists of the Discovery Center, Catherine’s Market, SpringHouse, The Stables and Kowaliga Restaurant. In addition, Russell Lands operates nationally ranked Russell Marine, Russell Do it Center & Russell Building Supply stores and Russell Home Décor. Russell Lands constructed the Lake Martin Amphitheater, a venue for celebrating culture and the creative arts. True to his namesake, Ben Russell founded Children’s Harbor, a not-for-profit organization whose focus is on strengthening children and families through a variety of programs, services and good works. To learn more about the company’s portfolio and legacy, go to RussellLands.com.

Admiration and respect for the classic golf courses of the “Golden Age of Architecture” inspired Ben Crenshaw and Bill Coore to establish the firm of Coore and Crenshaw Inc. in 1985. Theirs is an architectural firm based upon the shared philosophy that traditional, strategic golf is the most rewarding, and the creation of courses that present this concept with the greatest artistry is the ultimate goal. They have blended their personal experience and admiration for the classical courses of Ross, MacKenzie, Macdonald, Maxwell, and Tillinghast to create a style uniquely their own. Visit www.cooreandcrenshaw.com.