The year of 2022 is in the books, and the “big news” financially is the Federal Reserve’s battle against inflation. The FED’s normal weapon against inflation is to increase interest rates which in turn results in an increase in mortgage rates. On February 1, the FED Funds rate stood at .25%. Rapid and historically large increases occurred through the year with rates rising to 4.5% and the promise of additional increases in 2023.

For real estate, increased interest rates may slow sales volume by increasing the cost of ownership, in turn dampening demand. The desired effect is that the increased cost of ownership might also decrease the rate of inflation/appreciation for real estate. In fact, real estate is normally one segment of the economy that the FED has been able to impact consistently through its interest rate policies. For those in the primary home/starter home market, the increase in rates has had an effect on sales volume and home prices.

Increased rates have not affected values on the lake

What we have been most interested in over the last few months is the effect FED rate increases would have on the lake market, if any. The chart below shows the average and median price increases over the last 12 months. This is the same period during which the FED was raising interest rates in an attempt to slow the pace of inflation, so after a year, we think this is a good time to review values. The chart below marks the average and median prices for each month since last January. 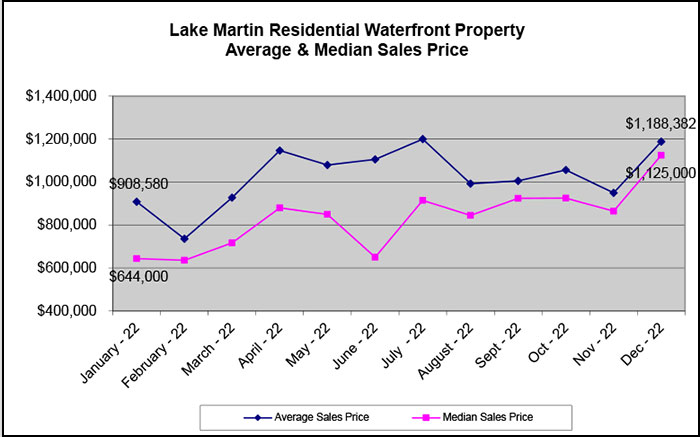 The chart reveals that there is definitely an ebb and flow to values. In May, the FED raised rates by a half-point with three-quarter-point increases in June, July, and September. There was a slight reduction in the pace of increases and the total average price by September. This was followed by sharp increases by year’s end. We think that is because we don’t have a demand problem—we have a supply problem.

At year’s end, just 41 waterfront residential units were for sale. That is a meager supply for 880 miles of shoreline! The chart below shows the historic inventory for Lake Martin as well as the month’s supply (list-to-sale ratio). Years 2017 through 2018 were what we considered to be “normal” years for the lake real estate market. Those years, inventory was at 300 units or roughly a 10-month supply. Currently, inventory is virtually non-existent with less than a two-month supply. 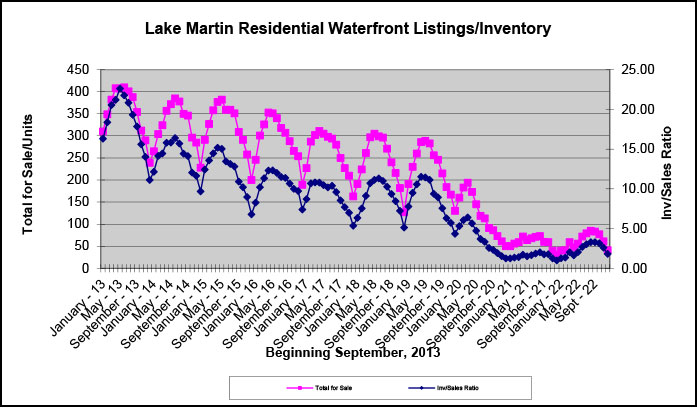 When inventory is low and demand increases, the economic model would say that prices should increase. In the case of Lake Martin, demand did increase with three key drivers. The first key driver was that the largest segment of our society, the “boomer” generation, was transitioning to retirement, and Lake Martin is a great retirement destination. The next key driver was social distancing, and the third was affordable capital.

The chart below shows the growth of sales prices and property values since 2018. As you can see, Lake Martin property values have performed very well over that time, nearly doubling in value. The greatest increase came when people discovered the lake as a place to spend time with their family and friends. 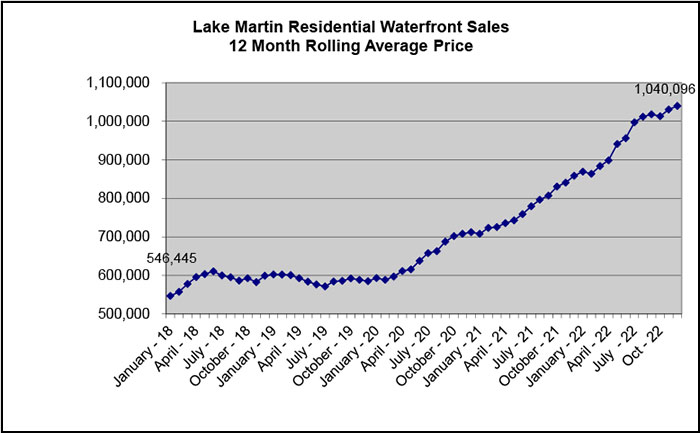 What to look for

Since so many purchasers of lake property over the last several years were able to finance their purchases with 3% fixed-rate loans, they will be mostly reluctant to sell. Since the lake is such a popular place to spend time, they realize that they cannot replace what they have on the lake easily. Prices are higher—as are rates—so the best move seems to be to enjoy their lake place.

Developers and builders will be supplying new properties this fall and summer. Our plans are to continue to enhance amenities to provide a great lake experience and to work with our builders to design lake homes that make sense in this economic environment.

If you would like more information about coming property offerings or about current values, please reach out to one of our Sales Executives at 256.215.7011 today.

*Data for this report was pulled from the Lake Martin Area Association of Realtors® Multiple Listing Service. The data period was from January 1, 2022 through December 31, 2022.